The future of OpenBST

Hello everyone. I just wanted to tell you what is planned for OpenBST. I guess making a lengthy post explaining stuff on Halloween is going to be an OpenBST Tradition :)

A huge update to OpenBST has just been released. It includes refined visuals, HiDPI compatibility, a friendly editor, and much more!

Hello everyone, and happy Halloween! Let’s have a look on stuff that happened recently.

OpenBST 2.0 is here! Well, in beta at least. This post will cover how you can download it and the most notable changes. So come in, have some coffee and let’s talk about what’s up with this new release!

An update on stuff coming soon in BST 2.0!

Hey there, just a small blog post on what I’ve been doing. Before you ask, yes, the next BST version will be version 2.0, but don’t get too excited yet :)

Hello there! Just a small heads-up on some new features on the website. In short : more bling and comments section. More details inside and stuff.

Hello everyone! It’s that time of the year where I get to write a lengthy changelog and tell you some stuff that happened. There are tons (okay, maybe not tons) of details inside on stuff that changed. Download OpenBST version 1.1 now and start writing!

BST is not dead.

Yeah, a serious post on April Fools isn't the best idea I've ever had, but there's something that needs to be talked about.

OpenBST 1.0 is out, with more modules, more customization, an easier language, and other cool stuff. It's also a good opportunity to discover OpenBST if you just came in :)

A very experimental release. This is barely usable, so do NOT use it if you are not mentally ready to do some debugging! It includes everything that was teased in the previous post. The tutorial was updated too.

0.3 may be the last version before we reach the golden goal of 1.0. Why? Because it is packed with awesome feature that make it the best release of BST yet. Well, I say that every time I make a release anyway, so… whatever, let’s just move on to the cool stuff!

The first Release Candidate of OpenBST is out! Check out the full description here! The main difference you will notice is the new interface. Some bugfixing is required on it, but other than that, it is pretty stable!

Hello! Welcome to the first page of this blog! Various information as well as updates can be found here.

OpenBST is a program that allows you to run and, to a certain level, create interactive fiction and stories. It is built using the Java programming language.

You can download it right now in the Downloads tab! OpenBST is compatible with Windows, Mac OS X, Linux and everywhere else where Java, Swing and JavaFX are supported. 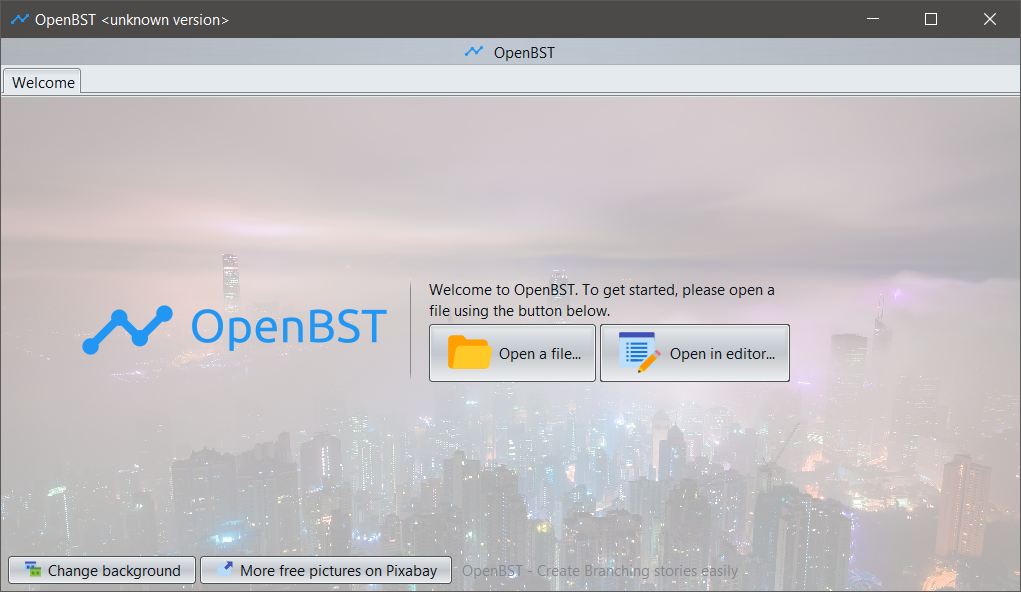 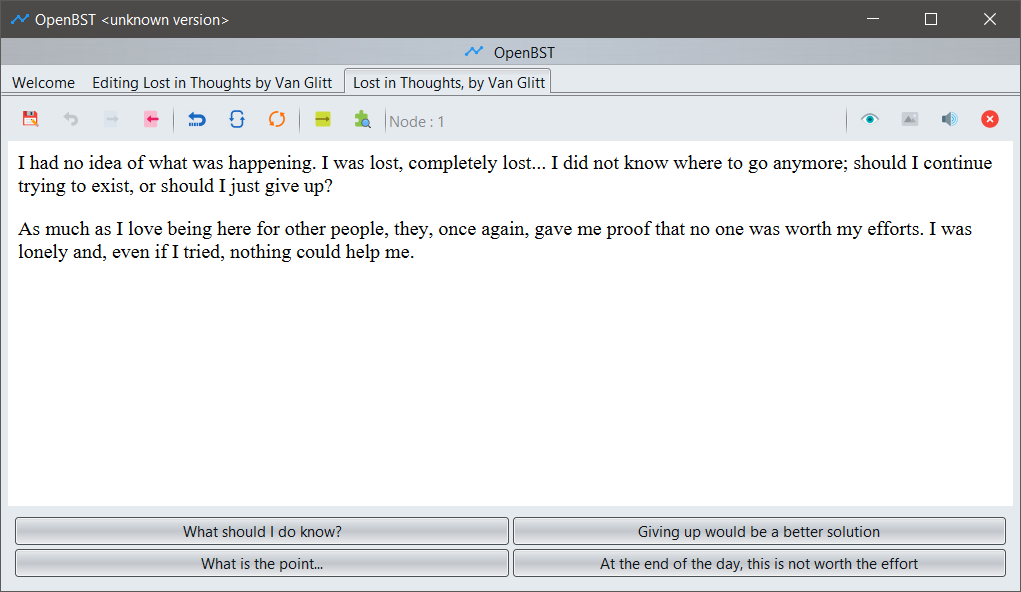 BST is a language used to create stories from simple text files. While you can use the editor built into OpenBST, using the raw BST syntax gives you much more flexibility and unlocks the full potential of OpenBST, with scripting, backgrounds, sounds and much more!

An official Syntax highlighter is available for the Atom text editor. Simply follow the instructions inside the tutorial to install it.

Yes! OpenBST is entirely free. It is also open source, and released under the Mozilla Public License 2.0

I found a bug! How do I report it?

How can I mark my story as NSFW?

Add the following line at the beginning of the file :

A warning will appear every time your story is opened.

My save state doesn't work!

Save states are quite buggy at the moment. Please report it as an issue on GitHub.

Can I format my story in Markdown or HTML?

Yes, just add one of the following at the beginning of the file :

I have another question!

Please either file an issue on GitHub or tell us about it on Discord.

Here, you can find all the downloads for OpenBST and the BST Tutorial

Simply install Java from java.com, and you're ready to go! Click on one of the OpenBST buttons below to download the version you wish to use, and double click the downloaded .jar file : OpenBST is now running! No installation is required, simply double click the .jar whenever you want to launch OpenBST.

LINUX USERS : You need to use the Oracle JDK, as OpenJDK does not work properly with JavaFX sounds, even when using OpenJFX. For Ubuntu/Linux Mint and derivates (ElementaryOS, Ubuntu MATE, Ubuntu Budgie, ...), use package oracle-java8-installer from PPA ppa:webupd8team/java (instructions available here).

Versions that have a slightly red background are not suitable for production use (they are beta versions). While they allow you to use the latest shiny features, they are also unstable and may crash.

RECOMMENDED DOWNLOADS : If you are a beginner, you should download the latest availale OpenBST, BST Tutorial and Reference